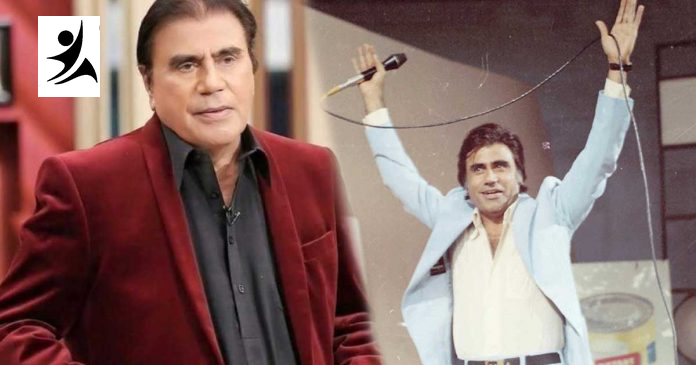 Dekhti ankho ur sunty kano ko Tariq Aziz ka salam (Salam for those who are listening and watching)[1].

Tariq Aziz was speaking with his non-mistaken voice, his voice converts into an essential for every Pakistani home. His magical words are being come to mind is such that he is going to do the live show here. His entrance was so beautiful that, when he came to the stage, from both hands send Salam to every person, even if he is at home or in the show. And at the end of the show, also sends Salam to every person and to get the attention of the crowd. He was the first legendary TV host that appeared on Pakistan Television (PTV) [1].

I knew him for the classical shows[2]:

Tariq Aziz was born on 28th April 1936 in the British-India of the city “Jalandhar” and now it’s in India’s Punjab. He was from the “Arian” tribe and his father’s name was “Mian Abdul Aziz Pakistani”. Aziz got his basic education from Jalandhar and moved to Pakistan in 1947 when it was being formed. He then went to “Montgomery now” in the Sahiwal¸ Pakistan. He got the graduated degree from “Government College Sahiwal”, and was living in the “Arian Community”[2].

He moved to Lahore starting his career and joined “Radio Pakistan”. In November 1964, when the first channel of Pakistan formed, its name is “Pakistan Television (PTV)” started his preliminary career in Lahore.

And thus, he became the first person who becomes the first TV host and the Pakistan Television Announcer all over Pakistan. There was black-and-white TV and no colours for the TV [2].

The fame of Legendary TV Host:

He was the first person that was famous all over Pakistan. First-person who did the hosting and got famous commercially by his famous TV show “Nelaam Ghar” and later its name changed to “Bazm-e-Tariq Aziz”. He interviewed a lot of Pakistani actresses, intellectuals, sports persons, and the celebrities in the show[2].

“Game shows are all the rage on television these days, and their highly paid hosts have their dedicated fans. But what about Tariq Aziz, the pioneer of Pakistani game shows?”

He came as a guest and answered all the questions in the show “Inam Ghar”. He gave all the answers and, in this way, he became the first person who gives all the answers in the show with no help from the audience and he donated the prizes to an organisation that worked for the welfare of people[2].

The show was in quiz-format game show that was hosted by Tariq Aziz on PTV. It started in the 1975s and remained for many years. In 1997, the show renamed “Tariq Aziz show”. Nelaam Ghar was the oldest and the most famous program TV show in Pakistan, which had many audiences and participation commercial sponsorships for the special and the questions rounds. There was a major corporation that was mostly shown in the sponsors “Hitachi”[3].

The show was 2nd time renamed and the new name was “Bazm-e-Tariq Aziz Show” in 2006. The show celebrated its 40th Celebration anniversary in October 2010. Its celebration on the completion of the 300th episode was in February 2012. It was the oldest television program that was continuously run for about 35 years on the PTV, and from the first day to the last day, it hosted by Tariq Aziz [3].

Worked in the Movies:

Tariq Aziz worked in a lot of movies; he was almost along with the actor “Waheed Murad and the actress Zeba”, made the movie “Insaniyat (1967)”, which was a Pakistani film. Tariq Aziz was also interested in other films and started working in “Haar Gaya Insaan”. Tariq Aziz did many morning programs and local television programs. He planned the telethons for the charity determination. Tariq Aziz worked in many films in Pakistan and in the twilight of the 1960s and the 1970s, he worked as the one sided-role. His film “Salgira (1969)” got fame in the musical film and it won the two “Nigar awards” for that year [2].

Tariq Aziz wife name is Hajira Tariq Aziz, who is the daughter of Mian Abdul Aziz Pakistani. His family comprises only two members. He said that it is from the ALLAH that he gave children to them or not. Tariq Aziz said that my all wealth will go to the Government of Pakistan; he said in an interview. Now his all wealth under the custody of the Pakistani Government.

Tariq Aziz was also interested in politics from his college life. He joined “Zulfikar Ali Bhutto’s, Pakistan People’s Party” in 1970. He revolutionised the public with his slogan’s party in the rallies, and the people called him “firebrand Socialist”. After he resigned and again back to the entertainment industry[2].

Tariq Aziz became a member of the National Assembly when joined the Pakistan Muslim League (N) in 1996. He elected from Lahore. He was the only politician who takes charge of attacking the “Supreme Court of Pakistan Building” in 1997[2].

When there was President Pervez Musharraf, he had joined the “Pakistan Muslim League (Q)”. Thus he didn’t get any fame and status in the party and left. Again he moved to the entertainment industry and could not reach the height which was in the former 1960s and 1970s. Because there were many TV channels and tremendous competition in Pakistan after 2002[2].

Tariq Aziz was a philanthropist, book-lover, and poet. A famous newspaper in English-language reported that in 2018: “He (Tariq Aziz) shared that having children or no children is the will of Allah and since he has no kids of his own, he would like to give all his earnings for the welfare of his country. Aziz has won the hearts of many by announcing his will and he surely is a role model for all of us.[2]”

Tariq Aziz interested in poetry and literature wrote poetry in the Punjabi language and also a writer. He wrote books, some given below[2]:

Tariq Aziz died on 17th June 2020 in Lahore. That time his age about 84 years old and admitted to the private hospital on 16th June 2020 after he got the illness. He buried at “Garden Block, Garden Town graveyard Lahore, Pakistan[2]”

He rewarded with the “Pride of Performance in 1992” by the President of Pakistan because of the services and the efforts for the nation[2].